Put Yourself Out There: The Myth of the Genius Programmer

Just barely over a year ago, I started my blog with my very first post. In it, I talked about how I was afraid to put myself out there and how I slowly overcame it.

In this post, I want to discuss how the past year has gone as well as some of the amazing things that have happened. I have met some really great people and I’ve changed how I think of things because of it.

The Myth of the Genius Programmer

Before I jump into that, let’s take a look at the myth I was believing. The video below is one of my favorite talks. It caused a paradigm shift in my thinking when I first watched it. I very much believed in the myth. I was lucky in that I watched it the summer before I started college.

If you have time, I recommend watching it. If you don’t just continue on and I’ll summarize it.

The gist of the video is that it is a myth that to create software, you need to isolate yourself in a room and code a ton. Then when you emerge from your asylum, your project and code is so incredible that you are forever enshrined in the annals of Computer Programming and you are hailed as a genius.

Beyond the obvious implications it has for being a programmer, the myth extends to other professions as well. The idea is that it is bad to seek help and to show your insecurities. If you have to seek help, then you are obviously incompetent which will be looked down upon by your peers.

Instead the speakers, Brian Fitzpatrick and Ben Collins-Sussman, discuss how software should be developed with other people and with as open as communication as possible. These “geniuses” that can do it alone are actually incredibly rare and often their stories are over exaggerated. Code that is written should be reviewed often and by other people; your mistakes, vulnerabilities, and inner self should be completely exposed.

This is hard because it goes against human nature; it isn’t normal to show your vulnerabilities. They encourage the following:

The ending of the video they share the secret in what often happens if you don’t believe in the myth. They say that if you follow the guidelines above:

…people will think you’re a genius.

This was completely revolutionary to me. I understood it the second they explained it in the video. I knew people that hid nothing and were vulnerable in every way; I just hadn’t realized that this was why I revered them as such.

I detailed how I was able to gradually do this in my first post. Essentially I just started small until I realized that nothing bad had happened yet.

This is the classic idea of desensitization. After the fear of being vulnerable and exposed went away, I never even gave it a second thought.

I started putting some things on GitHub like my dotfiles. I started to do more interviews for internships.

I started to talk to people about what I didn’t know in addition to what I did know.

I let people into the protective little bubble that I had created for myself because I thought the bubble was for the best.

My favorite blog post that I’ve written in the past year is without a doubt the post about my favorite quote from the movie Gattaca: Never Save Anything for the Swim Back. Ever.

One of my friends, Kien Nguyen, came across that blog post and read it. He sent me one of the best messages that I’ve received. This is what he said:

man, you are awesome :). just scanned over your personal website, and I was inspired and impressed with what you’ve done :). It makes me want to try harder to find and achieve what I really wanna do in my life. You are great Josh. I am glad I had a chance to meet you :)

Kien then decided to stay up late and watched the entire movie of Gattaca. I know this because after 2am, he sent me a message saying that he just finished watching it.

By writing that, I made it known that I compare myself to other people a lot. I told how I struggle with feelings of inferiority and the fear of being “stupid”.

Yet to have someone read about your vulnerabilities and draw inspiration from it rather than to judge you is so incredibly meaningful & exquisite.

A Tale of Many Tales

That is just one example but there have been many others. From people teaching college classes that have stumbled upon my post about using GitHub for university assignments, to people that are now using LaTeX for homework.

Changing someone’s heart and their mind to want to become better and to learn more is an incredible feeling.

This past March I made a website called TwoFactorAuth.org. It was something that I would never have done if I hadn’t overcome the myth and had still been afraid.

The idea would have entered my mind only to be met with an endless stream of reasons why it wouldn’t be perfect and how I’d look like a fool. The motivation for doing it would be drowned in the torrent. I would go on my way looking for the idea where I would be finally hailed as a “genius”.

I’ve also been getting involved with Neovim, the project that hopes to refactor Vim and bring it into the 21st century.

These are just two opportunities that I never would have seized a couple of years ago.

I completely understand the inert fear and discomfort that comes when thinking about “putting yourself out there”. It is completely natural and normal. But I also understand what it takes to break free from that myth and that fear.

I certainly don’t think that everyone has to “put themselves out there”. But I do think that if you do seek it out and challenge yourself to, that you will have meaningful experiences.

Don’t let the myth hold you back. Follow the words of Michael Scott: 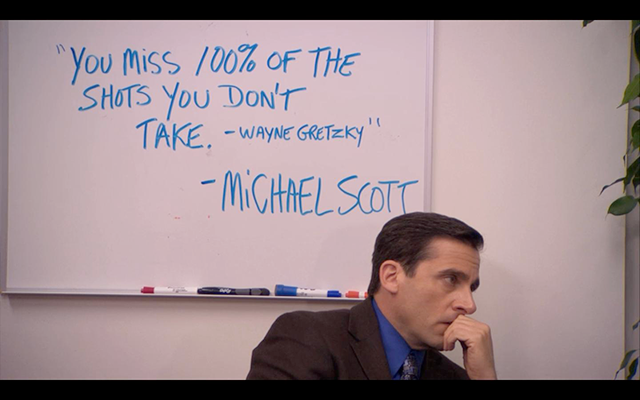