When configuring Vim with plugins, one of the common things that I like to do is to dedicate a letter to a single Vim plugin (or a group of similar tasks).

An example of this is below where I have some key mappings for @tpope’s Fugitive plugin:

Most of the mappings and plugin functions are pretty straight forward and they aren’t hard to remember. Unfortunately I have some other key mappings that are a bit harder to remember.

Take for example these cscope mappings:

What the hell do all of these mean? I took these from cscope’s Vim mappings and unless I’m using them very, very regularly, it is going to take some time to learn them all.

At first I wanted to make a plugin that would be able to help with this but I was able to come up with a simpler solution even if it is a bit hacky.

The first part is just to be able to view all of these similar mappings easily. The best way I found to do this is just to run :map binding_start where you substitute in what you want to look up.

In the case of Fugitive, we just run :map <leader>g. The output looks like the following:

As you can see, the output clearly shows the key mapping as well as the command that is ran. For plugins like these, it is very easy to use it as a reference for when you forget a mapping.

The next part of the solution is to make that command easier to run. I like to map it to ? and match it with the previous mappings.

This means the mapping for Fugitive becomes:

Now what can we do about those cryptic mappings that don’t make a lot of sense like the cscope example?

Well since nmap just runs a set of commands. We could just put some superfluous text that won’t affect the mapping yet show up when :map binding is ran.

I gave it a try and it turns out it works pretty well. It makes the command a bit messier (this can be tidied up by using whitespace) but this is what it looks like:

All we do is just echo out what the mapping actually does in English. Then by using <bar>, it tells Vim to run the commands together.

The end result is below: 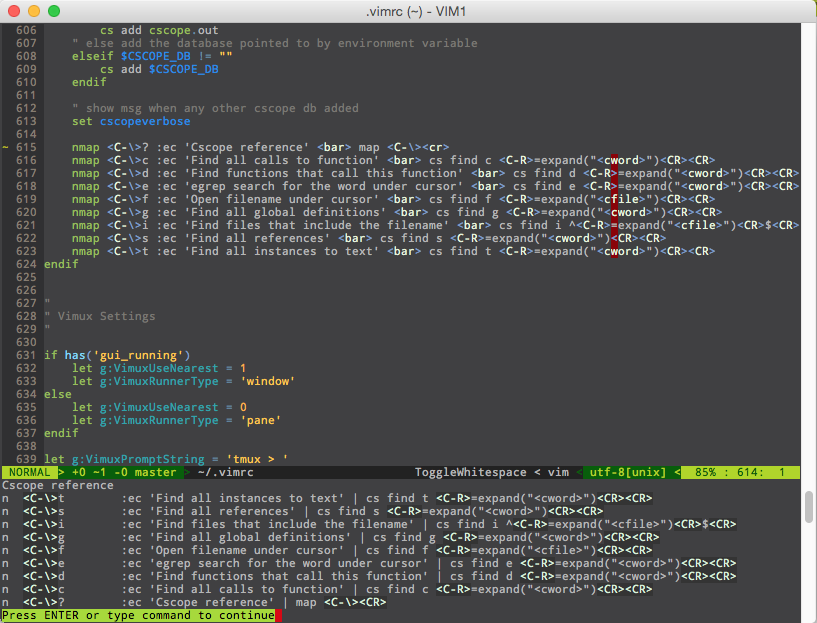 Then the mapping to be able to run this command quickly is:

Hopefully you get some use out of this. It has made it a lot easier for me to remember some of my more arcane key mappings.

Also, if there’s a better way to do it, feel free to get in contact with me on Twitter.